What is that 'something' about Sridevi? 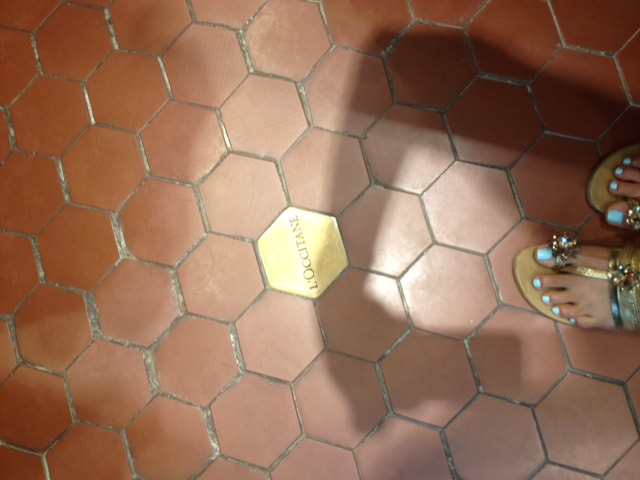 Isn't this an intriguing image? Arundhati shot it at the fragrant and elegant LÓccitaine Boutique in Mumbai. If you look closely, you'll identify the brass L'Occitaine tile embedded in the flooring. Right now, even as I key this in, I'm slathering my face with the Creme Precieuse from the Immortelle range. I don't really know whether it will do much good for my skin.... but I swear it's doing great things to my mood! ***********

This appeared in Bombay Times today... What is that ‘something’ about Sridevi…? While we all agree there’s ‘something’ about Sri, when asked what that something really is, we are totally thrown! We could say it’s nostalgia – for a top actress who waltzed away from dizzying movie glory , fifteen long years ago. That fact alone is enough to get her fans into a frenzy of anticipation.But that’s not the whole answer, is it? Many an actress has waltzed away, waltzed back and regretted the decision later. As they say in this cruel business, once off the silver screen, it’s off from people’s hearts and minds. Largely true. Fantasy feeds on visual reminders. In an era in which an alarmingly young Alia Bhatt (17) is being projected as the next big thing, and established stars hitting 30 are seen as over-the hill has- beens, it is a monumental challenge for Sridevi (49), a mother of two teenage daughters, to woo a blasé, hardened, seasoned audience once again. Will English-vinglish do the trick for the glorious Sri? I’d say, whether or not the movie sets the box office on fire, Sridevi devotees ( countless, across the world) will applaud, whistle and shout during the screenings.

I know one such diehard fan who lives in Hong Kong. Rama has worshipped Sri from the time he was a little boy ( Rama is just 30 himself). His home is a shrine dedicated to Sri . It has been his sole and most fervent dream to be in Sri’s divine presence and breathe the same air as his Goddess. Well, it happened recently when Sri was in Hong Kong to promote her film. I am not sure Rama has started breathing normally yet! To evoke this powerful a response, an actor needs more than just physical beauty. Sri, with her statuesque body and those eyes like ‘dark pools’ ( Rama’s description!) that invite you to drown in them, is indeed a gorgeous lady. But there are equally gorgeous and far younger stars around. While most of Sri’s contemporaries have either opted for Reality TV ( Madhuri Dixit) or disappeared into oblivion, by picking an unconventional,quirky subject, Sri has displayed rare acumen. For a girl , who at her peak, was known for her standard ‘Ask Mummy’ response to any and every question, today’s Sri has responded to interviewers with poise, grace and intelligence.

More importantly, she has picked a deglamorised role that relies far more on her histrionics than on those ample curves. That’s a pretty brave decision! Going by just the teasers and previews, Sri’s plain jane character comes into her own after facing enormous hurdles on account of her lack of English language skills in a foreign land ( Canada). Determined to overcome these hurdles and prejudices, the awkward, embarrassed lady decides to enroll in a language school. What happens after she acquires those hard to master skills, is the basic premise of Gouri Shinde’s movie. Thousands of Indians across the world will easily identify with Sri’s predicament. That in itself is a huge start. But eventually, the film’s commercial and critical success will rest on the audience response to Sri herself. One generation of movie goers doesn’t really know who Sridevi is .

The older fans may expect another wet blue saree dream sequence, complete with orgasmic groans and close ups of Sri’s heaving bosom. Despite these distorted hopes, my feeling is that Sri will score big time. The reason is simple : Sridevi endears herself to her audience. She has the capacity to connect directly and emotionally to her fans.

On screen, Sri is electrifying, no matter whom she’s playing. Off screen, she’s another human being – almost boringly reticent. The other thing about her comeback, is that she doesn’t sound desperate about it. Unlike most of her rivals. She, more than any of them, appears relaxed and chilled out about her big decision to taste stardom all over again. With an attitude like that, Sri has nothing to lose!