On Her Majesty's Secret Service

INTERVIEWS
The Biggest Hit in Town:
She is the only heroine today who demands and gets her price and choice of roles. Sitting cosily on the pinnacle of success, Sridevi talks about her career, forthcoming films, men and marriage.

Discuss the budget, the PM's resignation, Devi Lal's ouster, Raj Babbar's and Shatrughan's close association the V.P. Singh, the weather or any other topic, and you'll get different reactions. But mention Sridevi and everyone has just one reaction. WOW!
On this one subject on this one subject we are definitely united. After Sridevi wowed audiences with Mr. India, there has been no stopping her. In Nagina, Nigahen, Chandni and Chaalbaaz her sizzling performances on screen consolidated her position as the numero uno actress today. 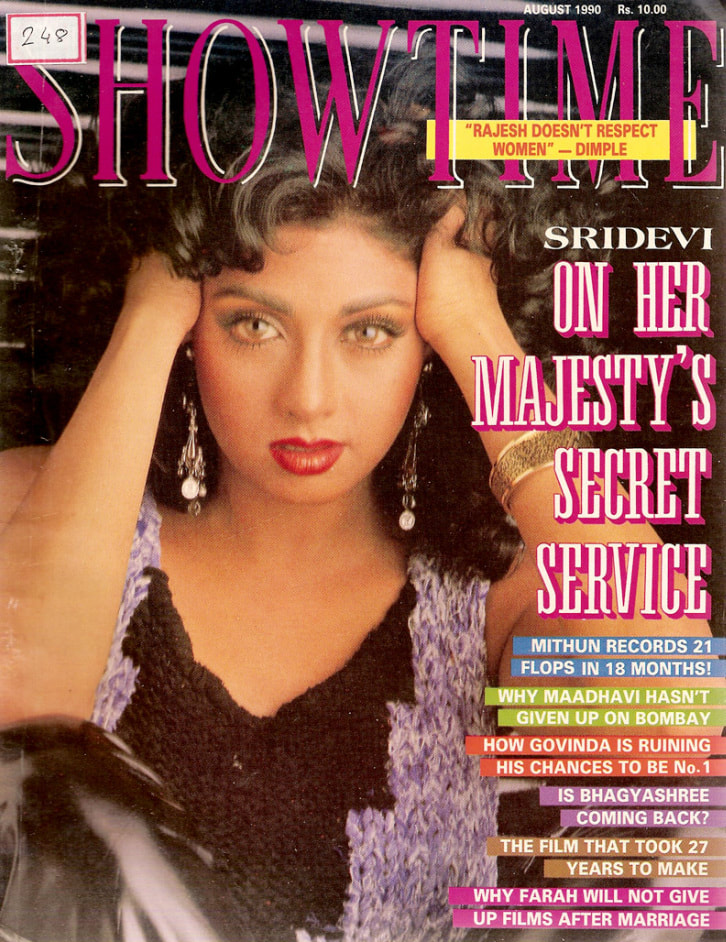 Looking the Glamorous in a pink midi Sridevi is dancing with hero Anil Kapoor to Saroj Khan's choreography in Roop Ki Rani Choron Ka Raja when I meet her. I ask her what is happening in her life? "I am so busy. I am leaving for London to shoot for 3 films Lamhe, Gurudev and Roop Ki Rani ... I don't have time to breathe" she smiles, relaxing between takes. She looks relaxed and in good spirits. I gasp when I hear her laughing uproariously at Anil Kapoor's repartees. She teases Saroj Khan. She definitely is in a carefree mood. She signs countless autographs and speaks to Ramesh Sippy, Vinod Mehra and Yash Chopra who have dropped in to meet her.

She is accompanied only by her staff. "Mummy is in the hotel. She may come here today" she says when I tease her about her dependence on her mother all the time. Sridevi seems more articulate and confident now. A confidence which only success brings. She is more expressive now. She reacts to things and people more openly now and shows her feelings. We settle down to have a nice cosy chat.

Is it true your parents were against your sister Latha's marriage? They wanted you, as the older child to get married first. Since you didn't, Latha ran away and you had rushed home to settle the matter?
{Frowns} Nonsense!
Nothing like this happened. Why should we object to Latha's marriage? The boy comes from a good family of high court judges. It's natural for parents to want their older daughter to get married first, but then Latha got a good proposal, so why should I or my parents object? She is happy with her new family, and she and her husband come home often. Yes, I definitely miss her because we have been constantly together. Now that She's married, I don't want anything more written about her. 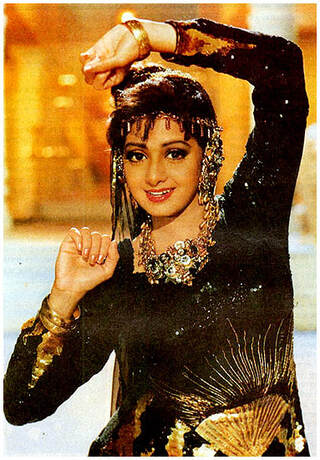 Sridevi in Banjaran
Okay, Let's talk about your future with tennis player Ashok Amritraj
First one magazine wrote that my mother had approached them for me then another wrote that the Amritrajs met my parents and soon I would marry and go away. I don't know who has been spreading these rumors. My mother had never approached them, nor have they met us. I feel sorry that the Amritrajs have been dragged into this controversy. I am used to such things so I am no more affected by them.  But why drag that family into all this? It's not nice, na? We have never met them. Once again I repeat that there has been no such proposal at all. (Sridevi says she has never met Ashok Amritraj, but in a recent interview, Ashok has admitted that he met her, but for only five minutes).

Now that you don't have secretary, who is managing your career?
My mother, She has always looked after everything. I don't have to worry about a single thing. My work is to act and look after the costumes and designs. My mother does everything else.

You had signed Maharaja for 30 Lakhs, which is your price now. Then why were there ads in the trade papers for a new girl?
Don't you dare write about the money. I will have income tax problems (grins). When Maharaja was offered, I suggested some changes, which were accepted and I signed the film. This is the first time I have heard about such ads. Ask the producer why he wants a new heroine.

Your preference for Chandni and Chaalbaaz has delayed Roop Ki Rani Choron Ka Raja and Banjaran, which were started before the other two films. Comment.
This charge is false. None of these films have been delayed because of me. We shot for Chandni for 20 days in Bombay continuously. The same was the case with Chaalbaaz. Roop Ki Rani... has big sets and is being done on a lavish scale. To shoot one song, we are going to Amsterdam. As far as Banjaran is concerned I had told the producer right at the beginning that I had no immediate dates for him but he insisted so I agreed. We had shot for a few days earlier, recently I have completed a long schedule for this film. 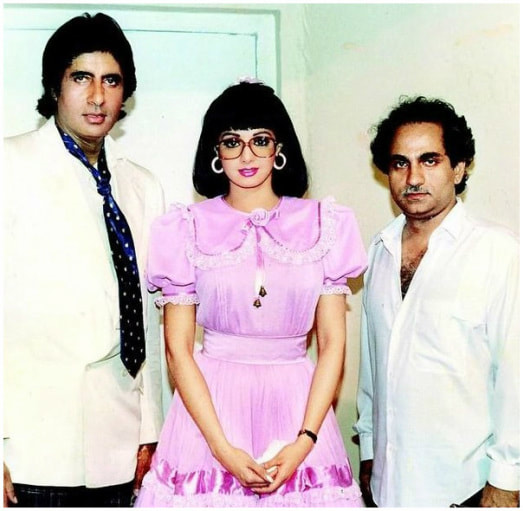 With Amitabh Bachchan & Ramesh Sippy on the sets of Ram Ki Seeta Shyam Ki Geeta
Hindi remakes don't normally do well. The latest example is the Telugu version of Chandni retitled Sridevi. It's said thay in the beginning the producer was shown doing puja and the end had him waving to the audience.
What? (laughs uproariously) I didn't know about this. I haven't seen the dubbed film. It's his film. He can do what he wants (controls her mirth with difficulty). It is true remakes generally don't do too well. The original has a flavor all its own. The audience know that Rishi and Vinod can't speak Telugu. It looks artificial. But (laughs again) I just can't get over the producer's actions.

How do you.. Will you stop laughing? cope with your co-star's unpunctuality? Vinod Khanna, Dharmendra ...
(Stops laughing and clears her throat) Well now I am used to everything here. If you know what time your co-star likely to come then you are mentally prepared and it's no problems.

You are playing double roles in quite a few films. Will there be much difference between these roles and will the audience accept you in double roles so often?
Chaalbaaz in which I had a double role, has been liked but the audience. In Khuda Gawah I play a mother and daughter, so obviously the characterization will be different. I have double roles in Lamhe, Gurudev, Ram Ki Sita Shyam Ki Gita, but the characters are different. The director and I will see that each character is portrayed differently. I'll work on it. But of course the last word will be the audiences'. They will decide whether they have liked me or not.

What happened to Ram Ki Sita Shyam Ki Gita? Why the delay?
I don't know. I have shot for very few days only. The producer hasn't contacted me yet.

As an artiste are you satisfied with your performance and career?
(Emphatically) No, I am dissatisfied. My capabilities and talent haven't been exploited fully. Here the emphasis is on glamour, not acting. I have worked in a lot of Tamil and Telugu films and there the characters are given more importance. It's less make-up and more the natural look. I have immense scope to show my talent in those films. I get artistic satisfaction working in South films. I wish I get roles that will satisfy me. At least one in a year. I am not satisfied with my career in Hindi films. I will continue to act in one Tamil film a year, as my mother feels that this way I will not loose touch with my mother tongue and I will be home (Madras) more often. ​ 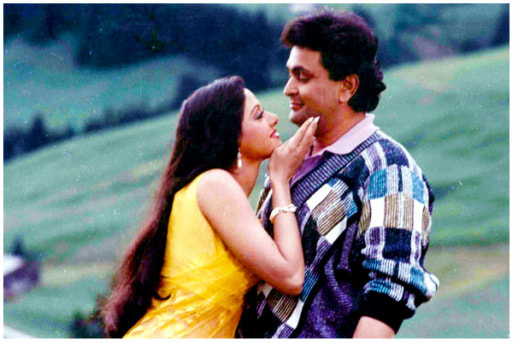 With Rishi Kapoor in Chandni
All your films have a lot of dances and your steps now look the same.
That's because people love to watch songs and dances. Indian people are so emotional. Every occasion has its own songs and dances. And everyone wants me to dance (giggles). Arre Sridevi hai toh dance to hona chahiye! That's what everyone says. So I dance.

Have you changed as a person?
No. (Smiles sweetly) I am still the same.

But there is a change. You have become more articulate now and talk more to your co-stars. Aren't these changes?
No, no. I am the same but since I know the language better now, I can express myself better. Then, I am working with the same people often now, so I know them better. I have become more free, that's all.

Do you feel trapped in a star image?
(Shrugs) Nahin. A normal girl's family life must be better than mine. Every minute is spent working. Kabhi din hua kabhi raat, pata nahin chalta. I can't just  go for walks or go out for dinner. I always feel I am in school. Get-up in the morning, rush for shooting, obey the directors or dance directors, pack up, go back to the hotel or home (if in Madras) have dinner and go to sleep. When the director says "pack up" it sounds like the school-bell and I am ready to rush home. On the sets I am an artiste, at home I am an ordinary girl, who loves to spend her time with only her family. Now tell me, am I stuck in an image?

Your behavior towards your staff is in contrast to your statement, They are expected to treat you like a star.
(Annoyed) I have heard some stories about a hairdresser, who said that I fired her for eating before me among other things, Why don't you ask my staff how I treat them?

You have bought Jawani (the dubbed version of a Malayalam film, which was advertised as a sex film starring Sridevi) for 60 lakhs why?
No comments. (I had met Sridevi earlier, just after the release of this film. The publicity pictures had a skimpily dressed Sridevi. An upset Sridevi had said that it was just a teenage love story, and she had worn short skirts and dresses the way a teenager dressed. The makers were capitalizing on her popularity by advertising it as Sridevi's sex film. She was definitely going to do something about it, she had said, as it would harm her reputation)

When are you getting married?
Not for another 5 years at least. I am busy. I have a number of films and I am concentrating on my career. There is no time to get married. My parents will find someone for me. The man should be broadminded, tall, good looking, South Indian and a gentleman. My parents will select the right person for me, and I'll get married.

Will you stay in India or settle in abroad?
Nooo-o (giggles). I want to live in India, especially Madras.

As I leave she goes back to her dance. A group of fans watching the shooting say adoringly "Isn't she gorgeous? She's just great yaar" That in short, is what Sridevi is.