Here are the roles Rejected by Sridevi and played by others. Of course these are not all but the well known ones. 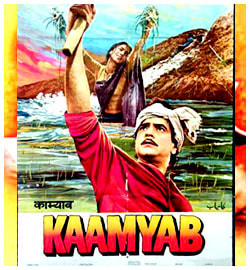 Padmalaya Productions the makers of Himmatwala offered Sridevi a role in the movie Kaamyab besides Jeetendra and Shabana Azmi but Sridevi did not want to play insignificant part in a movie and that with Shabana Azmi as well so she rejected the film. Padmalaya Productions got angry with Sridevi for rejecting their film and wanted to introduce another actress from the south that is Radha and for the first time in the history of Hindi Cinema there was a movie poster which had a name that did not star in the movie and that is Sridevi's name. The movie had this phrase "She’s not Sridevi. She’s Radha". Sridevi's mother was very upset when she saw the Kaamyab posters promoting Radha. Her point was, ‘Let them say Radha is the greatest, if they wish, but why drag my daughter's name into it?’. 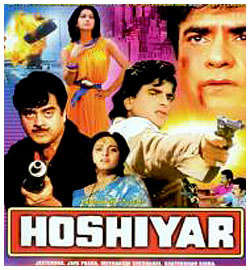 Sridevi has rejected Hoshiyar as the producer and director required her to wear more revealing  dresses and then she did not agree with the footage the role had. She was supposed to play Meenakshi Sheshadri's role against Jeetendra. The movie also starred Jaya Prada and Shatrughan Sinha. Many insiders revealed that it was Sri's mother who asked her to reject the movie as it was again from Padmalaya. She wanted to punish them because of their Kaamyab posters. The movie was successful at the box office but Meenakshi was criticized for her dresses and she was accused that she was trying to copy Sridevi's style. There was a big fight between Jeetendra and Meenakshi in the sets and both never worked against each other in the future. 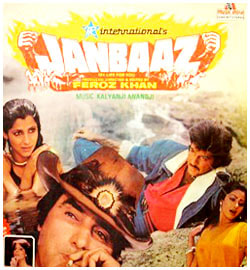 ​Surprised?? Yes we know that she is in this movie but Feroz Khan wanted Sridevi originally for the main role but Sridevi rejected the role as it contained lots of skin exposure. Feroz knowing Sridevi's popularity at that time wanted her at any risk in the movie hence the character Seema was created just for the heck of getting Sridevi in the movie. Dimple Kapadia was signed to play the replacement. Sridevi's song Har Kisi Ko Nahin Milta became an instant hit and made a new definition for the word sexiness and the chiffon saari never ever became that popular. 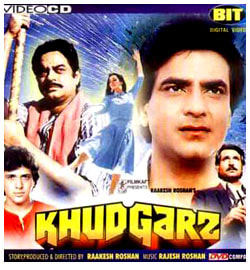 Rakesh Roshan wanted Sridevi to play the role against Jeetendra. Sridevi felt the role insignificant and doesn't suits her so she rejected the movie. Bhanupriya was signed for the role and they even used Naaz to dub her voice. Naaz is the same dubbing artiste who used to dub Sridevi's voice in many movies. The movie was successful but it did nothing to Bhanupriya's career.
​ 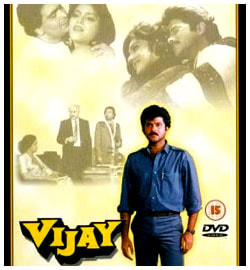 Sridevi was supposed to play Meenakshi Sheshadri's role in this movie but she didn't like the part and she politely rejected the offer from Yash Chopra and she has already signed a more significant role in his Chandni. The other reason was that she had played other multi starrers at that time. The movie starred Rajesh Khanna, Hema Malini, Anil Kapoor, Rishi Kapoor and Sonam 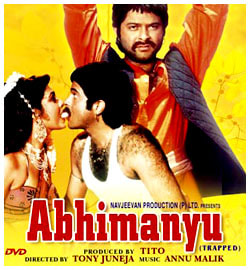 Sridevi has signed this film, she even shot few of its scenes, but due to some differences with the director about some revealing scenes and due to clash with Chandni dates she walked out of the film and Kimi Katkar has replaced her. The movie was average at the box office.
​ 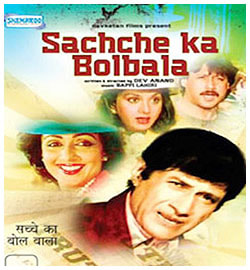 Dev Anand was very keen in having Sridevi for his film. Sridevi's presence in the film would have guaranteed a great initial response in terms of box office figures. Sridevi signed the film, but Dev Anand requested additional time from Sridevi than the initial schedule allocated. Sri could not allocate more time due to clash with her other movies hence had to walk out of the film. Dev Anand was not happy. Meenakshi Sheshadri stepped in. The film tanked at the box office. 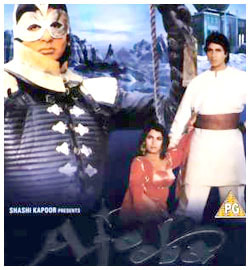 The film producer and director Shashi Kapoor wanted Sridevi so badly for Ajooba to star in front of Amitabh Bachchan but Sridevi was not too keen in doing the movie as her part wasn't the way she wanted it to be. In addition to that it was very difficult to get both Amitabh Bachchan and Sridevi together in one movie because of the cost associated. Plus Sridevi used by that time to reject all the movies against Amitabh Bachchan if they did not offer her same importance and equal footage if not more. Later Dimple Kapadia replaced her in that role. 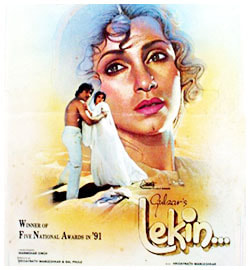 Lata Mangeshkar wanted Sridevi to play Dimple Kapadia's role in this movie but Sridevi rejected the movie because of date hassles and because she was going through tough personal times as her father passed away and because of her mother's deteriorating health. Later Lata Mangeshkar approached Dimple who agreed to do the role. We believe that this was one of the most interesting roles Sridevi was offered but unfortunately couldn't do.
​ 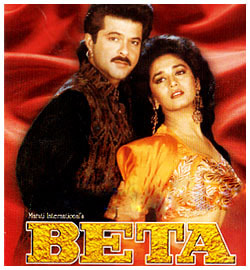 This role was written from scratch to Sridevi but Sri rejected the movie for two reasons. the first was that she wanted to complete her other delayed projects and the second was that she was already signed many movies against Anil Kapoor. There is even a song which was incorporated for her exclusively that is Dhak dhak karne laga which is the Hindi version of the Telugu song from her Telugu blockbuster movie with Chiranjeevi "Jagadeka Veerudu Attilokasundari" which was released in 1990. Madhuri Dixit was signed for the movie instead. The movie became one of the major hits of 1992.
​ 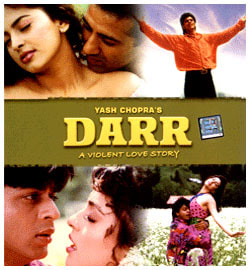 Yash Chopra offered the role of Kiran to Sridevi but Sridevi did not like the role so she rejected the movie giving her reasons to Yash Chopra. Sridevi even claimed that she would have accepted doing the movie only if she was offered Shah Rukh Khan's role. Later even Yash Chopra has stated that Sridevi would not have suited the role as she would have overpowered both the heroes in the movie. The movie was very successful and it did well for Juhi Chawla who was Sridevi's replacement. Juhi Chawla was accused that she tried to copy Sridevi specially in the song Toot Gayee Toot where she dressed like Sri did in her Amrapali dress for Chandni's Tandav. Yash Chopra explained later that he tried to give Juhi the Chandni look for the movie.
​ 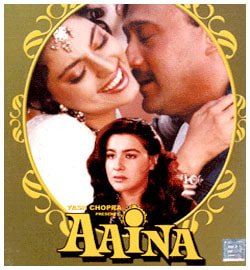 Another Yash Raaj production and another Sridevi rejection. Again Juhi Chawla was used as a replacement. Sridevi went publicly that she doesn't want to work for Yash Raaj Production in anything less quality than Lamhe. Aaina was somehow a good movie and it was successful too but of course it is nothing near the everlasting magic of Lamhe.
​ 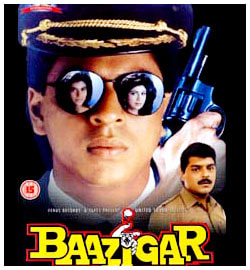 Sridevi was the first to be approached by Abbas Mastan for Baazigar. She was supposed to play a double role as twin sisters. The directors felt that the audiences would not sympathy and will not feel sorry for the hero "Shah Rukh Khan" if he kills Sridevi!!! So they have changed the characters and instead of two Sridevis both Kajol and Shilpa Shetty stepped in. Sri did not agree or reject to do the movie but it was discussed with her before the changes being made. The movie was a big hit and Shah Rukh won the Filmfare Award for best actor.
​ 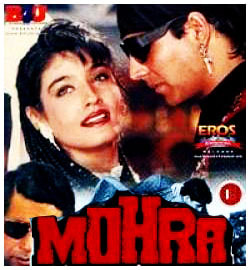 In this movie Sridevi was supposed to play the lead in front of Akshay Kumar. Sridevi rejected the movie and then Divya Bharti was signed. Divya passed away when the movie was in the making and Raveena Tandon has replaced her. The movie was a big hit and the pair Akshay - Raveena fell in love during the making of this movie. The song Tu Cheez Badi Hai became an instant hit.
​ 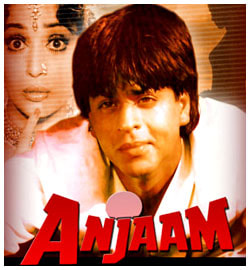 We are not so sure if this movie has been offered to Sridevi. Our only source is Saroj Khan who said so in her interview with Star & Style Magazine April 1994. What we are sure that this movie was written with Rekha in mind. Actually it was Rekha who even suggested the name Anjaam for the movie. Saroj Khan claims that Sridevi rejected the movie. Later Madhuri Dixit was signed and been nominated for Filmfare best actress award for the same role. However, the movie flopped very badly at the box office as people thought it was very gory.
​ 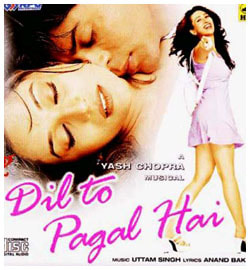 Sridevi again has rejected this Yash Chopra directorial movie as she thought that she has done movies with similar story. The role then went to Madhuri Dixit who won her fourth Filmfare award for the same role. The movie starred Shah Rukh Khan, Madhuri Dixit and Karisma Kapoor. Strangely this was the fourth movie that Sridevi rejected in front of Shah Rukh Khan. The movie was one of the major hits of 1997 but it is considered one of Yash Chopra's weakest love story movies.
​ 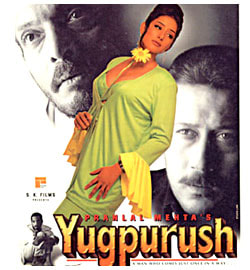 Nana Patekar went on town and told everybody that he is working with his favorite actress Sridevi. He was too excited about it. Sridevi has accepted the role of a prostitute which she played years back in Bhagwan Dada in 1986 but later she walked out of the movie as she felt that she will not be able to do it. She said that she has a mental resistance for such roles at this stage that is why she walked out of the movie. Many rumors were spread at that time that it was because of Boney Kapoor that she walked out of this movie. The story goes that after Nana won Filmfare award for Krantiveer he and Anil Kapoor had fights in the sets of the movie Wajood and Anil had to walk out of the movie. Both Anil and Boney Kapoor convinced Sri to walk out of Yugpurush. Sridevi was out and Manisha Koirala was in.
​ 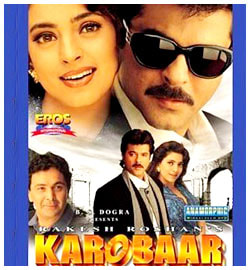 Sridevi rejected Rakesh Roshan's Karobaar because of some revealing scenes and because of a scene which required her to wear a swimsuit. Rakesh had explained to her that those scenes were necessary for the story but Sri did not feel comfortable with them hence rejected the movie. Juhi Chawla was the replacement. The movie starred both Anil Kapoor and Rishi Kapoor but it failed in the box office.
​ 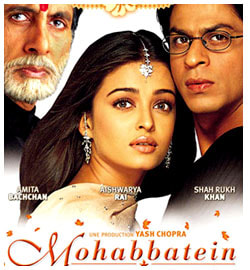 Sridevi was supposed to play a character in the movie which was not revealed by the movie makers. When Sri rejected to play the part the character was not replaced but removed from the whole movie and the script had to be changed so that the story line will not be affected. The movie starred Amitabh Bachchan, Shah Rukh Khan and Aishwarya Rai and it was one of the major hit of the year.
​
Role was scrapped ​ 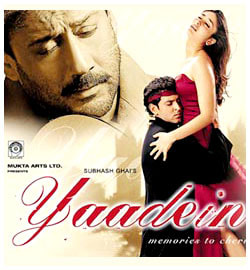 Subhash Ghai wanted Sridevi to play a character role in front of Jackie Shroff but thankfully Sridevi said a No No to this insignificant role and she was replaced with Rati Agnihotri. The movie was a big failure in the box office. It also starred Hrithik Roshan and Kareena Kapoor.
​ 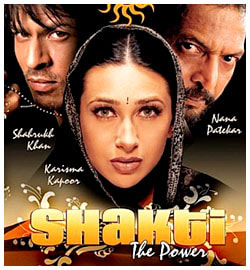 Sridevi's own production. This was supposed to be Sridevi's comeback vehicle to Bollywood. The movie is a remake of Hollywood's Not Without My Daughter. Before the shooting of the movie Sridevi became pregnant with Khushi and she had to find a replacement. She offered Kajol the role who could not do it then Karisma Kapoor was signed. This is considered as one of Karisma Kapoor's strongest roles.
​ 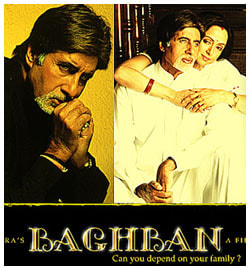 B. R. Chopra wanted Sridevi to play the lead against Amitabh Bahchcan in this mature love story but Sridevi has rejected the movie as she did not want to make a comeback to movies and she did not think of this movie as a suitable comeback vehicle. Hema Malini was signed instead for the movie.
​