Feroz persuaded me in Tamil: Sridevi 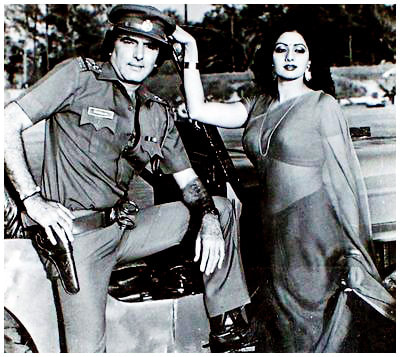 The mesmerizing Sridevi only did one film Janbaaz and that too a 10-minute role for Feroz Khan.

But what an impact! “I’m glad people still remember me in that brief role. It’s all because of Mr Feroz Khan’s presentation that I made an impact in Janbaaz,” says Sridevi.
Arguably the only guest appearance in her entire career Janbaaz featured Sridevi in a song Har kisi ko nahin milta yahan pyar lighting up the screen in an orange chiffon saree.
Recalls Sridevi, “At first I was hesitant because it was just a guest appearance. Also the presentation seemed a little too sensuous for my personality. But when Mr Khan spoke to me in my mother tongue I was immediately convinced. Yes, I was as surprised as you are. But he spoke fluent Tamil... He was a very classy gentleman and his cinema reflected that. I was very proud to be in Janbaaz. It proved it’s not about the length of the role but the impact.”


Sighs Sri, “It’s sad we’ve lost an actor and filmmaker who defined style and sophistication in our films. Where are the filmmakers and filmmakers like him?”
Is that why she isn’t coming back to acting? “Whatever I do now has to enthuse me and my audience. I can’t just jump into it, for the sake of acting. It’s very difficult for me to find the right vehicle to come back.