INTERVIEWS
To Queen Bee or not to be? Can she still keep the box-office humming? The Roop Ki Rani answers

Has the Queen Bee lost her sting?
For nearly a decade, Sridevi was voted the numero uno heroine by the trade pundits and the media alike. Among the heroines, she demanded and received the highest pay packet. Sure, there has been tough competition from Madhuri Dixit but after estimating both their box-office bonanzas and calamities, it was clearly a tie-up between the twosome.
Sridevi called the shots in one studio and Madhuri in the other. They had their loyal producers and directors, they had their distinct fan following and to an extent, still have their faithful backers. In other words, there was room at the top for both the actresses. If Sridevi has her buoyant and hubby style of acting, Madhuri can be sizzling and scintillating in her own special way.

And now there is Juhi Chawla, basking in the glory of hits like Hum Hain Rahi Pyar Ke and Darr, but quite sensibly refusing to be drown into the number harum-scarum. While film-makers of every stripe concede that Sridevi is a consummate artiste. Of a late the trade has been abuzz with the talk that the Queen's days are numbered. Some of her producers as well as heroes have switched to Juhi, and some have even stated (off-the-record, of course) that Madam should come off her high horse. Or that she should reduce her price. 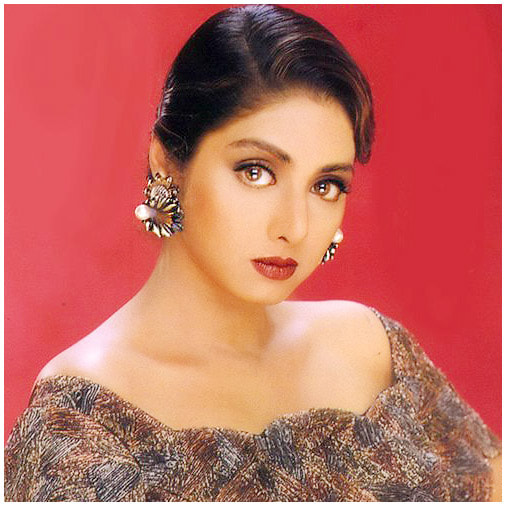 It's also being said that her film with Salman Khan Chaand Kaa Tukdaa, being made by Saawan Kumar, isn't as red hot a proposition as it was when it was flagged off a couple of years ago.

However, it goes without saying that if Madame was to hit another boundary or sixer, the same carping Cassandras would be whistling another tune.
For trade watches and fans, the questions of the day are: Will Sridevi come out triumphant? Or is she fighting a losing battle? The answers hunge, as they always do, on those things called luck and chance. Yet when you meet her at the Mehboob studio in the midst of a shooting schedule, the actress who will always be remembered for her wide range of performances, seems to be unfazed. Evidently, she's a fighter and intends to tackle the downturn in her carrier. Without much more ado then, you ask:

At present you have four films in hand. How come?
Believe me, it's out of choice. I don't know why some directors are going around claiming that I'm doing their films. I can't understand how this industry functions? How can they talk like that? I've turned down 15 offers because I've understood the need to be selective. Earlier, I'd take on a film only on the basis of the character I was asked to play but now I know that the entire project is important - the producer. The director, the story and the script. I may have been a little careless earlier. But I've never ever signed on each and every film offered to me. I have a very unusual role in Laadla which will be my next release. 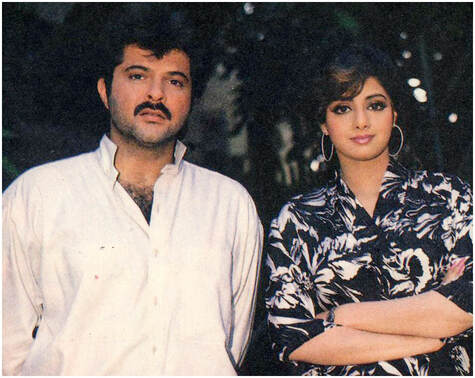 With Anil Kapoor in GuruDev
Is it true that Boney Kapoor persuaded producer Nitin Manmohan to sign you for Laadla after Divya Bharati's death?
Really? Who told you that? All I can say is that I was first approached for the film's Telugu version Gharana Mugudu but I turned it down because I was confused about the character they wanted me to portray. Again, I was Nitin Manmohan's first choice for the Hindi version, I couldn't say "Yes" because of dates. So Divya was signed. After her tragedic death, I was approached again. Since I was the original choice anyway, I didn't think anyone did any kind of lobbying on me behalf. It's true that the producer brought Boneyji along when he came to request me to reconsider his offer.

Why did you reconsider project in which you had found your character confusing?
Because the character has been much more sharply defined in the Hindi version. I play a tough and arrogant women. It's a role with plenty of potential.

Something on the lines of the role of the no-nonsense sister in Chaalbaaz?
That was a fun-loving character who starts drinking the minute she's upset. In Laadla I'm very disciplined.

With Salman Khan in Chaand Kaa Tukdaa
Do you have high expectation of Meri Biwi Ka Jawab Nahin?
Of course, I do. I play a housewife. There are many touching as well as comic scenes. I speak in the Bhojpuri dialect throughout the film. Just two more schedules and it should be complete.

You're working with Salman Khan and Akshay Kumar. Do you feel comfortable working with these heroes?
What are you implying? That we're mismatched? Hardly! I can't help it if I've been working since I was a child… I just happen to have more experience than them. There could have been objections only if they were younger than me… Moreover, I haven't gone out of my way to make producers pair them with me.