Roles Meant to Others Played by Sridevi

These are the roles meant for others or rejected by them and eventually were played by Sridevi. 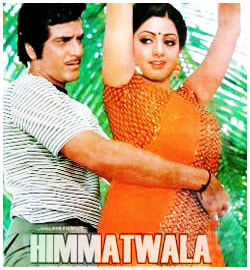 Before deciding on Sridevi for Himmatwala, Jaya Prada was one of the nominees to play the character Rekha as she was the one who played it in the south version. But then Padmalya Productions and Jeetendra were keen to take Sridevi as she was not exposed and she was already a superstar in the south. Sridevi stepped in and the the movie became a huge success. It is rumored that after Himmatwala released Jaya Prada did not talk to Jeetendra for 3 months.!! People still remember Sridevi in her leather outfit in  that movie.
​ 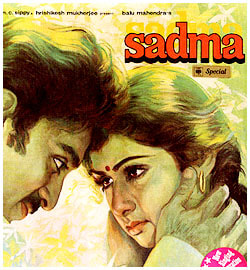 When Moondram Pirai became a huge success in the south the makers decided to remake it in Hindi. Kamal Hassan has been chosen again to play his part but the part of Reshmi they have decided on Dimple Kapadia since the Hindi language was an obstacle for Sridevi. Dimple was busy working on Saagar and could not give them the required dates hence the role went back to Sridevi and the Devi gave a powerful performance  to prove again that nothing can stop her. Her role in Sadma until date is considered to be one of her career's best and the most definite child act in the history of Bollywood.
​ 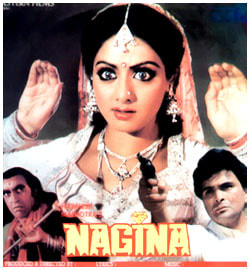 They say that Harmesh Malhotra has pleaded Jaya Prada to play Rajni in his movie Nagina, but Jaya who used to get afraid of snakes did not even want to listen to the story. She rejected the movie right away. When Harmesh Malhotra offerred the role to Sridevi she jumped to the idea and said yes immediately. The rest of the story is history. Nagina became the biggest blockbuster of 1986 where it made the public and critics stop comparing Sridevi to other actresses. Sridevi became out of reach and with no competitors. Bollywood's heroines have been categorized into two categories!! one is Sridevi and the second is all rest actresses!! Again here Nagina became one of the most important movies in Sridevi's career. It is also considered to be one of the best snake movies Bollywood has ever produced and has the best snake dance. From then Harmesh Malhotra became a loyal Sridevi fan. He has done with her several movies ensuring that she would be the first choice everytime. Another record both Nagina and Sridevi gets here is that it is one of the first Hindi movies which has a sequel i.e. Nigahen - Nagina II. Until date in Bollywood no actress has a heroine oriented sequal to her credit except for Sridevi. Sequels are only being made now days for male oriented films.
​ 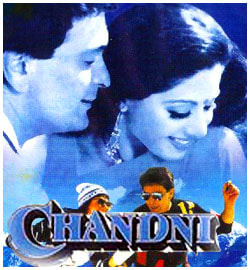 Rekha was to be the first choice for Chandni. It is also said that Yash Chopra has discussed the movie with her. But what made Yash choose Sridevi was the age factor. With Rekha he would have required more mature heroes to play the part. Maybe Yash Chopra by then wanted Sridevi as she was a more saleable star where she would attract the crowds. Sridevi was in and Chandni became another huge hit of 1989. Now when people think of the color white on heroines the first thing comes to mind is Chandni and Sridevi. The movie became such a rage that people used to sell stuff under Chandni brand like Chandni Salwaar Kameez, Chandni choodi etc. Sridevi played the middle class girl Chandni brilliantly that you would not be able to think of anybody else playing the role.
​ 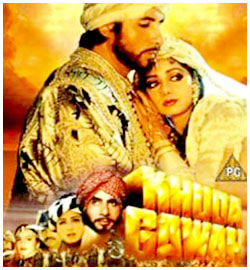 Khuda Gawah's idea came up to the lights around 1988. The nominations for the roles of Benazir and Mehndi were two different actresses that is Dimple Kapadia and Saira Banu's niece Shaheen. Both Mukul Anand and Amitabh Bachchan were keen on Sridevi but they did not approach her as she used to reject any Amitabh Bachchan starrer because she thought that heroines would not have an important part to play. When some differences happened between the producers and Dimple Kapadia regarding the fees and other things they have decided to approach Sridevi for both roles where she would play both the mother and daughter. Sridevi agreed to do the movie provided they would adhere to the script without any change. Both the roles were played by Sridevi and the movie until date is considered one of the most memorable movies shot in Kabul. Yet our Devi with Khuda Gawah gets another record here for being the only heroine who has a double role in an Amitabh Bachchan movie in his prime time.
​ 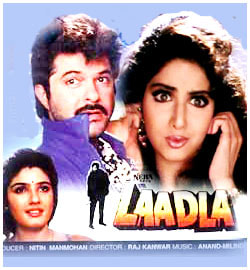 Sridevi was offered both the Tamil and Telugu versions of Laadla and she rejected them as she did not want to play the negative role so that people will not hate her!! When she was offered the Hindi version again she rejected it. The producers have signed Divya Bharti as a replacement. Divya has shot also many scenes of the movie but the actress's sudden tragic death made  a big trouble to the producers. Nitin Manmohan went to Boney Kapoor asking him for help since his brother Anil Kapoor was among the cast. Both Boney and Nitin approached Sridevi again and convinced her to play the role which she did. Sridevi did a perfect job in Laadla that it would give you the impression that Laadla was written for her from scratch. With Laadla people loved Sridevi even more than what she was thinking and her famous phrase "Understand, You better understand" became so popular.
​