Sridevi Steps into The Nervous Nineties

INTERVIEWS
In the 80s she reigned supreme. She had the world at her feet-money, success, fame. Riding high on a heady crest, she was the darling of adoring multitudes. Unchallenged, she proved her prowess beyond question. Time and again in film after film, she showed that she could be all in one. Sex symbol, glamour doll and actress. And yet past year wasn't very kind to Sridevi, She had only one release to her credit and that too was far from a super-hit. To add to it, a host of fresh young faces emerged on the scene to threaten her much envied supremacy. On the personal level Sridevi suffered the painful loss of a much loved father and subsequent illness and hospitalization of her mother. Is she slipping? What does the future hold for her? Sridevi talks frankly, freely and fearlessly in the following detailed interview. 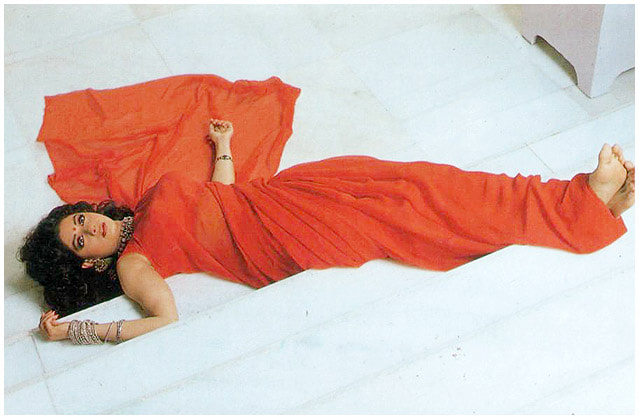 The Lonely Lady:
She strides on the sets from her make-up room with a strong, purposeful walk, head bent, dressed in a purple trouser-suit. She has none of the demeanour of a superstar. There is an air of quiet dignity about her. Sridevi walks straight to her director, listens attentively to him as he explains the scene. Shot okayed, she sits down quietly without any hungama or fuss, and obligingly signs autographs while people watching her yell, "Sridevi, hey, that's Sridevi"
She calmly raises her hand, waves back and then resumes watching her co-star do his scene. No starry tantrums, no yelling for her staff or loud greetings to those  around, nothing. But then that's Sridevi. She silently accepts her status, but is embarrassed if someone praises her. She's confident but an introvert. Chameleon-like, she turns into a totally different person once the camera whirrs. Even when she's surrounded by people, discussing clothes with her designers or talking to her director or co-stars she looks  - yes, lonely.

"I want to clear this" she says as we sit in her make up room later. "Everyone says, that now my father is no more and my mother ailing, that I am lonely and have to bear all he burdens and responsibilities on my shoulders. That's absolutely wrong. Yes I do miss my father, yes my mother is not in the best of health, but that doesn't mean I am lonely. Most of the responsibilities have fallen on my mother's shoulders. Even though she can't move around much or accompany me to shootings, everything is under her control. Without her green signal, nothing  can go ahead. I loved my father so much, as a daughter, a friend. No words can describe my love for him. It was beyond description" A veil of sorrow falls over her eyes. She is silent for a while, then sighs deeply. "More than me, It's my mother's loss. Can you imagine what she is going through? My father used to take care of everything, the electricity bills, other bills, cars, staff and now it's my mother's responsibility She doesn't know the first thing about any of it but she has to do it just the same. Sine she can't come here and meet people, I pass on her messages to others on her instructions" 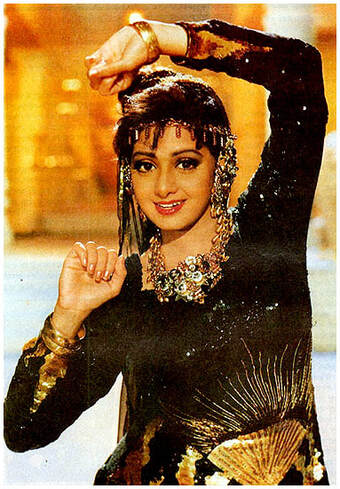 Sridevi in Banjaran
The Boney Connection:
"I get so mad at all these rumors. It's my mother who manages things for me and no one else. Not Boneyji" She adds, looking irritated. "Why is everyone talking like this? He just helped out in the beginning, that's all! If it had really been anything more than that, I should have signed 12 films with Anil, but I just have one! (Roop Ki Rani Choron Ka Raja). I think my shifting out of Centaur must have started these rumors. I have always hated staying in hotels, and I wanted to buy a flat for quite some time but for some reason never got round to it" She shrugged. "So, since I didn't like the idea of staying alone in a hotel room without mummy, I shifted into this flat. Yes, it does belong to Boney but he doesn't live there. I stay there alone, I don't even have dinner with the family. It's the ideal arrangement. It's a totally private flat, no interference from anyone and I have complete privacy. If I had bought a flat and stayed in a building then my neighbors would say 'woh hamare saath raghti hai' it wouldn't be right, would it? otherwise, everything is just the same. Bhagwandasji looks after my work but it is my mother who is in charge."

"The past year, 1990 has been a bad year for me. I lost my father and I had just one release." Which fetched her an award, we add and for the first time in the half hour that we had spent talking, a lovely smile illuminates her face. "yes" she says softly, but before she could slip further away into her memories, one wonders if she has any hopes for the year. Her reply is swift. "Nothing! If I did ask, would I get my wish? I can't get back my father, can I? As for my career, I hope I have a few more releases in 1991. Lamhe, Roop Ki Rani Choron Ka Raja. They'd better be completed fast! Can you see these earnings I'm wearing? I got them from London for this film, but now they've broken and I have tied them with string, since the film has taken so long!" She flashes a naughty grin. "As for my other starrers, Khuda Gawah, Banjaran, Gurudev, all the problems with them have been solved, and we'll start shooting soon. Raj Sippy will be directing Gurudev. Farishtay is the film I am really looking forward to. I am satisfied with my performance, I am serious, I mean it!" She said , all the while laughing herself. "After Chaalbaaz, my character in Farishtay is so complete, so full, you wait and see". 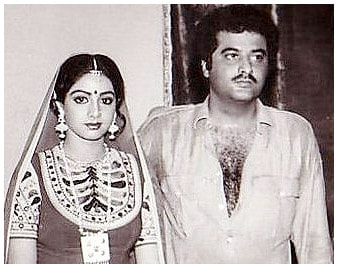 With Boney Kapoor
The Career Threat:
" I want all my films to do well. I work hard in them and do my best, the rest is for the audience to decide. I will complete all my films and then start work on the new ones. I have signed Heer Ranjha, there's Maharaja, Mahesh Bhatt's film with two heroes.. But I have made it clear that I will start shooting for these only after I have completed all my old films" Why did she refuse K.C. Bokadia's film which was to be directed by Dilip Kumar? Reportedly she was influenced by Boney not to do the film. "You always come up with something or the other!" She burst out, an exasperated look on her face. "Yes I was offered the film and it was a great opportunity to work with Dilip Kumar, but they wanted to shoot the whole film outdoors, and required immediate dates. Which I couldn't give, because I was and still am busy completing my films and I couldn't go outdoors for such a long time. Now someone is doing the film, so it's better not to comment any more on this subject. All I will say is that no one can influence me except my mother. And she didn't . That's all there is to this controversy!"

Does she feel threatened by the brigade of newcomers that have entered filmdom? she looks serenely unperturbed. Exuding that characteristics confidence, she says "They can't do my kind of roles, even now I can do teenage roles and I have done them, worn shorts, ponytails. But if anyone expects me to do them again, then it is unfair to me, I have moved beyond all that now, But I have  not been reduced to bhabhi characters. I am not that old!" She giggles, "In Lamhe I play a 16 year old girl in love with an older man". Did she think she would be able to play a teenager convincingly? "No, not exactly a 16 year old but a teenager, yes. ;let's see how the audience responds. Anyway everyone has their own place, It's good that so many girls have come. A for me, I would love to work with the art filmmakers like Shyam Benegal, Govind Nihalani. I can always compromise and make adjustments if the role is good (one supposes she meant financially!) " I have also signed Mahesh Bhatt's film. You think his films go over budget? Anyway, I don't want to talk about his film now" 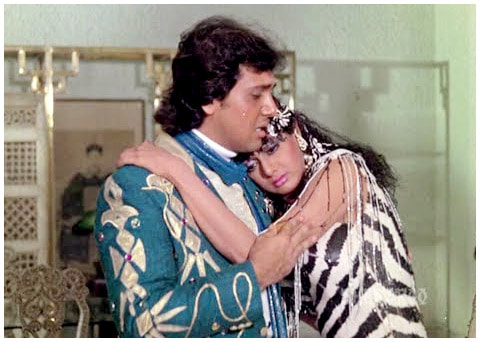 With Govinda in Gair Kanooni
The Future:
" I have put back all the weight I lost for Chandni. My father never liked to see me slim. So I don't want to lose weight now. I have been hearing a lot about how I have changed, but I haven't really. I am still the same. I have no intentions of quitting or leaving and I am not marrying this year. No one is looking out for guys for me! Not that I will stay single indefinitely but when the time is right I'll leave, get married and settle down. No, I don't want to direct films. All I want to do is act. I will complete these films fast, so that I can start working in my new lot of films.  No I reiterate marriage is not on the cards. My mother is responsible for everything and things are going exactly as they should. But I do find a difference in myself. "She pauses. "First , my mother used to be my support. Now I am holding her" She ends meaningfully, and she gets up ready to walk on the sets to gives her shot. She strides off, head bowed full of memories of happier times, oblivious to the shouts of  'Sridevi' 'Chandni'.....

Best Films:
Meendum Kokila (Tamil):
This film has a special place in my heart because I was so deglamorised, no make up, only plain sarees. The whole film was so different.

Kartika Deepam (Telugu):
I was hardly 14 years old when I did this film where I played a dancer who later becomes a mother. The whole film was on my shoulders. I used to feel so funny doing such a role at that age! the film was a super hit.

Chaalbaaz (Hindi):
I regard this is my best film to date. There were various shades to my characters. I was relaxed throughout the shooting. For the first time I enjoyed watching the film and specially myself on screen. Generally I am never satisfied with my performances, but I was happy when I saw Chaalbaaz.

Moondram Pirai (Tamil):
I got the Tamil Nadu government award for my performance. Sadma was the remake of this film.

Best Directors:
Shekhar Kapur:
I have done only one film, Mr India with him. Whatever the scene, Shekhar knows how to get the best out of his artisites. He has a comfortable air about him, which made me feel relaxed on the sets. I'd love to work with him again.

Harmesh Malhotra:
I never felt that I was shooting while doing Nagina and Nigahen. He makes me feel so much at ease, is so concerned about me, makes such a great fuss over me!

Satish Kaushik:
He's so confident. He won't compromise, I praise him because he's good. Once he told me "please mat tareef kariya meri, I become nervous!"

Yash Chopra:
What I like about him is his total involvement . During Chandni he used to think and talk about the film. He forgets everything else. He's amazing. The film becomes an obsession for him. It's one big picnic while shooting for him.

Rahul Rawail:
I have never worked with him, but I have seen Dacait and I liked it very much. Whenever we meet, we plan to work together, but somehow the projects don't materialize. He's a good director. He can direct any kind of subject. I hope something comes up soon!"