INTERVIEWS
Which has been your worst movie experience?
I was doing a guest appearance. Now don't ask me to name the film because I cant remember it. they make you feel special when you are only doing a teeny weeny role and so you tend to get carried away. I was supposed to jump onto a glass topped table. I jumped so hard that I went right through the glass. I got up and started saying quite bravely "nothing , nothing, im okay" it was only when I saw the frightened look on the faces of the unit members that I realized I was injured seriously. my thighs were covered with blood.

Which has been your most difficult stunt?
I hate doing stunts. I feel very uncomfortable when im asked to take on big built fighters. and its all so unrealistic. I have refused films in which I was just asked to fight from the first reel to the last.

What was your first job?
I was a child artiste of four. I vaguely remember playing Lord Muruga, which is somewhat similar to playing Lord Krishna. it was a small film made by Chinappa Devar who had quite a few mythologicals to his credit. for Thunaivan, we went to shoot in a village. I cant recall much more but I do remember that my parents were very proud of me.

Sridevi in Thunaivan
Describe yourself at the age of 10.
I became a heroine when I was 10. I was already an established child star when some producers came home and told my mother they wanted to see me in a saree. she thought this was for some film which I was already doing and so she agreed. my mother has always been particular about the kind of films I take on. even as a child, I only acted in films in which I played a pivotal role. the producers were quite mysterious about the film they wanted me to do. they told my mother " trust us you'll be happy with what we have in mind for you" Masterji in which I played N.T.Rama Rao's grand daughter had just become a super hit. now they wanted me to play a grown up girl's role opposite newcomer Ravi Kumar. my mother didn't know how to react. and I didn't have a clue about what was going on. luckily there were no romantic scenes. I played a blind girl who's very attached to a small child. the film was a big flop. around the same time, I played a double role of a mother and daughter in a Malayalam film. I had a great time doing the film I didn't know what was happening  throughout.

Now tell me, after all these years can you walk into a shop and buy your own groceries today?
in Madras? impossible but in Mumbai it's possible. just the other day, I walked into a neighborhood shop and bought some soap and a tooth brush. I zipped in and out so fast that no one could react even if they recognized me. even when im abroad I cant enjoy the pleasure of browsing through stores like Harrods or Selfridges. there are Indians in every corner of the world. perhaps I could shop around if I disguised myself. but then I'll miss the high of being recognized as a star. ah well, I guess one cant have everything.

When was the last time you worried about money?
perhaps not too often but money does put me in a flap at times. should I be cribbing? no, I shouldn't. god has been very kind. I've never had income tax problems. I've never faced a crisis as far as money is concerned. 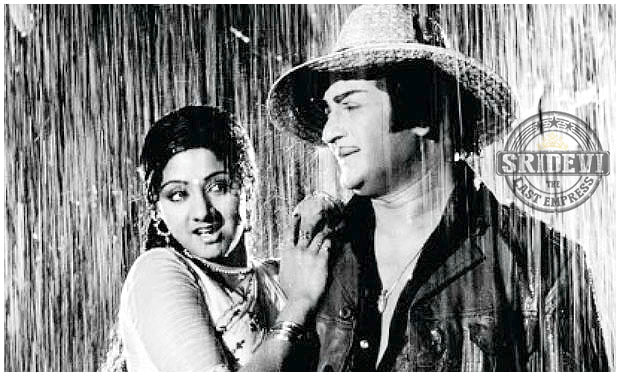 With N.T. Rama Rao in Vetagadu
What is the most expensive thing you've bought?
my mother has done all the buying for me. our first big purchase was a house in Madras. we still have it but we've moved into a smaller house now. it's more practical.

Do you know how much a liter of milk costs?
(Stunned) Huh? I don't know.

The price of LGP has gone up alarmingly.
(Laughs) Has it? I have no idea.

What's the one thing that is always in your refrigerator?
Vanilla ice cream. I used to have it everyday. not anymore though, I have to keep track of my calories.

Can you cook or are you a disaster in the kitchen?
I enjoy cooking. I can cook chicken without oil which tastes yummy. but since I don't have much time to spend in the kitchen, I haven't yet become an expert chef.
Isn't the way to a man's heart through his stomach?
I certainly hope not. im not a very good cook. so if my husband were to depend on my cooking it would be nothing short of a disaster. however I'll ensure that he eats well. we could get a good cook, you know.

What's your idea of romance?
thinking and dreaming about the man I want to spend my life with.

How do you know when you're in love?
(Straight-faced) it must be a great feeling. I'll tell you the details when I do fall in love.

What would a man have to do to woo you?
he should be honest, good looking and tall. and he must love me more than anyone else in the world.

How would you ideally like to spend an evening?
By going out for dinner. I've always longed to do that but there haven't been too many opportunities. since I'm quite shy, I wouldn't be able to handle the people who'd come over to our table. when I'm conscious of the fact that I'm being watched I can't eat a morse!. dinning out has been possible occasionally when I've been abroad for shows or shootings. I love Thai and Chinese food. I start missing Indian food after a while though.

What do you love eating most?
Rasam and rice.

With Rajesh Khanna in Naya Kadam
What do you enjoy reading?
Frankly, im no bookworm. I like flipping through a magazine whenever I have the time. I just don't have the patience to read books. the thicker the book, the more it puts me off. I think I have a problem, I cant concentrate for very long. for example, I take ten days to see a film on video. I fall asleep after every two - three reels. there are so many films of mine which I haven't seen completely. it's not that I'm restless. I just don't know how to put this. it's not as if I don't like films either. that's not possible. after all, whatever I am today is because of films.

What is the most demanding thing about being a star?
there is no such thing. a star is a normal human being, she can do anything she likes. being in the public eye is a big kick, there's nothing intimidating about it. I love being a star and I thank god for making me one.

What do you fear most?
I'm not exactly scared but lizards give me the creeps. if there's one in my bedroom I run off to sleep on the sofa in the living room.

Have you ever wanted to punch a costar or a director?
(Alarmed) No, never, but there must have been times when one of them must have wanted to punch me. No, no actually I don't believe that either. I've been a thorough professional besides keeping my temper in check. 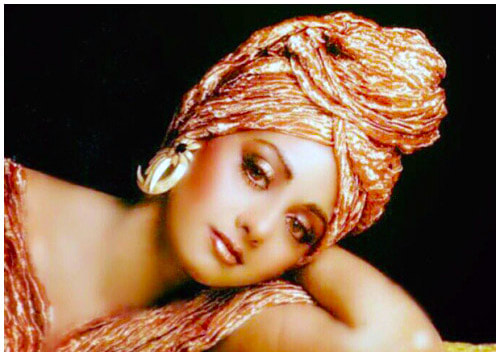 When do you lose your temper?
When I realize that unless I hurry up I'm going to be late for my shooting. Quite often, it's my fault. I love to sleep. I keep saying, "just five more minutes" every time my aunt tries to wake me up in the morning. Obviously once I'm up on my feet, I'm in a tearing hurry to get ready. That's when I'm irritable, really irritable.

What's the worst piece of gossip you've heard about yourself?
That I'm married. god knows how many times I've heard that. terrible! How can the magazines concoct such rubbish?

What do you complain about most in a hotel?
for 10 years, I lived in a hotel in Mumbai. And believe me living in a hotel is a real pain. Don't get me wrong though, there was nothing wrong with the hotel I stayed in. In fact, they took very good care of me. There's something so impersonal about a hotel. It's a strange place, it's not home. and the walk across the lobby after doing double or triple shifts is just too much. besides there's no privacy. I like having my own people around me. I would also miss home cooked food, I used to yearn for piping hot chapattis.

Do you feel you've missed out on a normal education?
I don't think so. I was a good student. for a while my parents did make me cope with school and films simultaneously. when we'd go on outdoor shoots, a teacher would accompany us. but after a point, this wasn't practical. I had to choose between studies and films. I chose films. 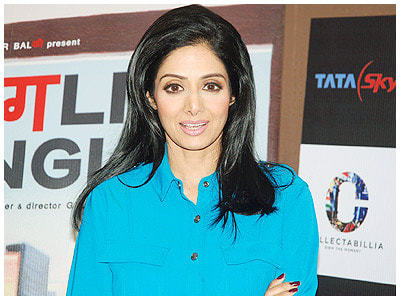 Did your parents pressurize you to act?
they never pushed me into doing anything I didn't want to. But yes, they did encourage me to act in films. my father was a lawyer. we shifted from Madurai to Madras so I could go to a better school. fortunately or unfortunately, I joined the movies. my father's brother was a congress MLA. he was ill and couldn't attend a meeting so he requested my father to go instead. I was very attached to my father and insisted on tagging along. there I was spotted by poet Kannadasa who asked me whether I wanted to act. I remember murmuring, "ask my father" he then introduced us to Chinappa Devar. That's how it all began.

What do you do to stay thin?
Since I'm too lazy to exercise, I stick to a rigid diet. No rice or milk products and that includes ice cream.

Any tips for those who copy you?
Just be yourself.

Do you have a computer?
(Suspiciously) I do. I even started to learn how to use it. but I've given up now because I don't have enough time to practice on the keyboard all day long.

Which god do you worship?
that depends on what I'm praying for. if it's something related to my profession, then I pray to Lord Balaji. when I'm praying for something personal, Goddess Karumariyamma has to listen to all my pleas.

If you went up to heaven and met God, what would you ask for?
I would say, "God! now please let me meet my father".
​