Personality of the Week - Sridevi

INTERVIEWS
She may have had a string of flops. She may not hold the mantle of No.1 anymore. But she still remains a force to reckon with. Her fan following hasn't dwindled and neither has her spirit been crushed. Looking slim and fresh with renewed optimism, Sridevi is yet again all set to conquer the audience hearts with Army and Yugpurush. An interview with the actress...

The first time I met Sridevi was sometime in '83. The new sensation from down South, Bombay industry had gone bonkers over her after Himmatwala. Our appointment was fixed at Hotel Sea Rock where she was staying. "I hope you are not going to ask me about Jaya Prada," she told me on the phone. "I feel very tired of answering the same question again and again." I liked her forthrightness. I had expected to meet a dumb beauty, but the girl on the phone sounded confident and assertive. Predictably, the candor disappeared when I met her in person. Defensive and self-righteous, Sridevi did not comment on anything even slightly controversial and answered all my questions with an `ask mummy' or `I don't know'.
Two days later I met Sridevi again. This time for the photo- session. My drive to the studio in her car was a delightful experience because she came out with what I consider even now, her most classic quotes.
Samples: "Why do they call him (Rajesh Khanna) Kaka," she asked her eyes full of innocence. "It sounds so much like ta-ta" or "just because I like non-vegetarian food, it doesn't mean I don't like idles." I was amused. It was my most hilarious star encounter and for days after that, I was willing to tell Sridevi jokes to anybody interested in listening.
​ 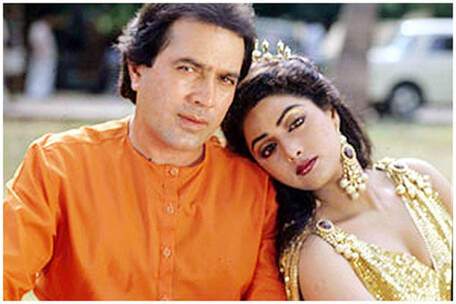 Sridevi with Rajesh Khanna in Masterji
A week after the photo session, I was forced to meet Sridevi yet again. The photographs we had shot with her, due to some technical problems with the photographer's camera, were under exposed and our editor insisted we shoot a fresh session. Sridevi was offended that we could be so negligent but professional enough to accommodate us. After consulting her secretary, she gave an early morning appointment for the next day. "I hope it is going to work this time", she told the photographer, a bit sarcastically. The shoot was fixed for 7 a.m. in her hotel suite. We were in the outside room, the photographer setting his camera and Sridevi getting ready with her make-up when there was a knock on the door and in walked Asha Bhonsle with her son, Hemant. If Sridevi was shocked she did not show it. She wasn't expecting any guests but the two had apparently come on an appointment fixed with her secretary. When they left, Sridevi felt distressed that she wasn't appropriately dressed for visitors. She wasn't as angry with secretary for forgetting to inform about the appointment as with the guests for not phoning her from the lobby. ​ 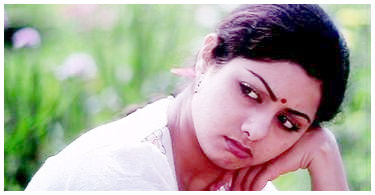 Sridevi in Sadma
Over the years, as Sridevi grew from strength to strength, She seldom made candid confessions. In fact, one seldom caught her in a vulnerable moment. With success, she had become further introverted, further defensive. A lot had to do with her complex personal life. Rumors about her relationship with Mithun Chakraborthy, a married man put a strain on her which slowly began but gradually spilled over in her career too. Soon, Sridevi got the reins of her life together however she was lucky that all the right films came to her at the right time. Mr. India, Nagina, Chaalbaaz, Chandni and Sridevi was the undisputed numero uno. Producers fought over her dates, heroes considered it a privilege to be starred opposite her. Films, money, comfort or costumes, Sridevi got what she demanded. She made her own rules, lived by her own dictates, was unapproachable. Journalists criticized her for living in an ivory tower. ​ 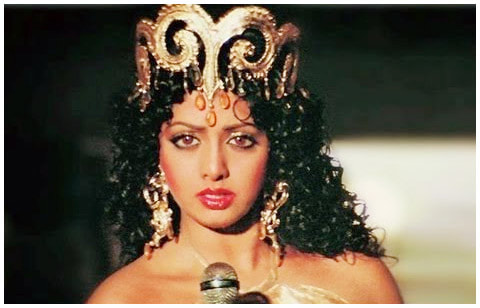 Sridevi in Mr. India
Journalists continued to complain of her unapproachable behavior. Whenever the attacks hurt her, the only way she could deal with them was by putting her shutters down. In those rare interviews she gave, she was extremely cautious, seldom spoke beyond monosyllables.
Not anymore however. The last few months have witnessed a transformation of the actress. Suddenly, Sridevi has become friendly, has become communicative. To find out why the numero uno actress has suddenly lowered her defenses, I spend an afternoon with her on the sets of Nitin Manmohan's Army which has her in the lead with four young newcomers. It is an exceptionally hot day and Sridevi dressed up in a heavily sequined pink ghagra-choli and heavy jewelry, is uncomfortable. In between shots, she escapes to her air-conditioned van parked outside the studio entrance. Done up in pale shades of blue and pink the van resembles Barbara Cartland's description of castles in her book. "I've never read her books." Sridevi says a bit shyly and you ask her your first question. ​ 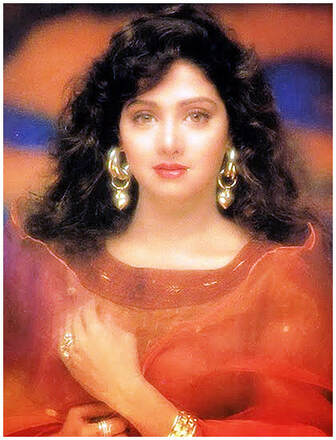 What books did you read in your growing up years?
Nothing...Growing up years were spent in the studios. There were no books. There were films and there were all these stalwarts. I watched them act that's how I grew up. I didn't read any books, as such except maybe `Chandamama' comics. But I don't feel a sense of loss for what I gained in the studios was equally valuable if not more from what I could have gathered from the books.

Do you regret not completing your education?
No. One can't get everything in life. If I was educated, I'd be doing a different kind of job today. Because I didn't, I got into acting. I like being an actress. I enjoy my stardom. The day I stop enjoying it, I'll give it up.

But you've been doing this for so many years. How come you don't feel bored?
How come nobody asks this question to the doctors...to the lawyers. Don't you journalists also do the same kind of stories. Then why is it that only film stars are being asked this question again and again. We are doing different films, different roles...wasn't Chaalbaaz different from Lamhe? There is so much more variety in an actress's life. I'll not wear this costume tomorrow. Even my hair will look different.

Of the characters you've played, which one has been the most difficult?
Difficult...I think this is a difficult question. Sometimes, certain scenes have been difficult because the director had something else in mind and I had something else but no role as such was very tough. A role like that has yet to come. ​ 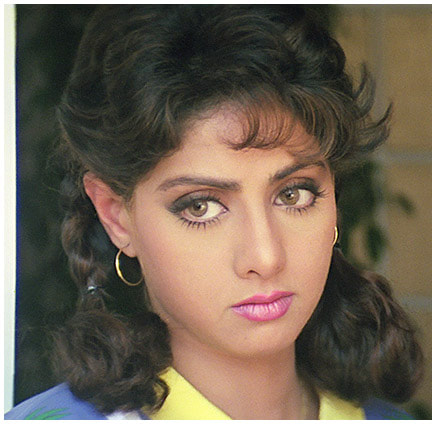 Sridevi in Lamhe
What about Sadma - You haven't played a role like that in all these years.
What can I do if nobody offers it to me? Even Sadma wasn't difficult because the director was so clear in his mind about what he wanted. I was merely projecting his thought.

That's being modest.
No, it isn't. In those scenes, where I know I've contributed, I don't have to talk about them. Sadma was exactly how he narrated the subject to me.

Those who work with you feel that you are changing.
(Smiles) I don't know. Journalists have been writing about it but nobody says it to me personally. I don't feel I have changed. I think because I went through a very low phase after my father's demise and I wasn't meeting people, everyone began to read more into my behavior than necessary.
Critics even say that it is because you are insecure that you are getting friendly.
If I am not communicative, I am arrogant. If I am, then insecure. Either way I am damned. Really, I don't see why I should even bother to answer such a question. ​ 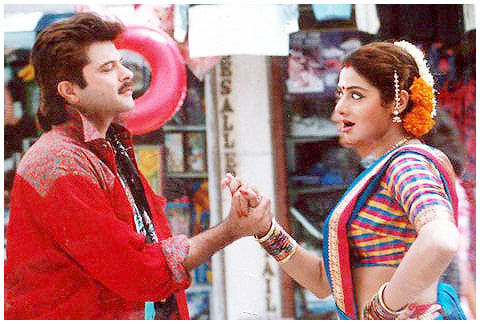 With Anil Kapoor in Roop Ki Rani Choron Ka Raja
Your recent films (Lamhe, Gumrah, Roop Ki Rani Choron Ka Raja,) haven't fared too well.
Hits and flops are a part of one's career. I feel sad that these films didn't do well. Especially a film like Lamhe because good films deserve to run. Anyway, Lamhe is a big hit on the video circuit abroad and that is a big consolation.

What about Khuda Gawah, don't you feel the double role came too close on the heel of Lamhe?
Probably, but both of them had a different setting. The characters were different. In Lamhe, you'd be surprised, we shot the younger portion before the older one. In Khuda Gawah of course, Mukul wanted me to literally copy Amitji and I have to admit that I enjoyed doing a take-off on him.

There are rumors that Rahul Rawail is planning a film with you and Rekha?
Well, Rahul did mention something to me but it was merely in passing. I will believe it only when I see the script or am given a contract. Until then, ideas and rumors can float around as much as they want.

Of your future films which one do you look forward to?
There are many and Army is one of them. I like my role in this film. From the way it is shaping, I think the film is going to be different.

Earlier you couldn't do without your sister Srilata. Now your brother Satish has become indispensable.
See, I don't think it is nice to say such things. They are my siblings after all. Srilata accompanied me because I cannot go everywhere alone. Once she got married, I needed somebody to be with me. My mother is no more in a condition to travel. The passing away of my father has affected her greatly. Thankfully, I have a brother who is ready to accompany me on my outdoors. It is not fair that journalists should go on and on first about my mother, then sister and now brother. ​ 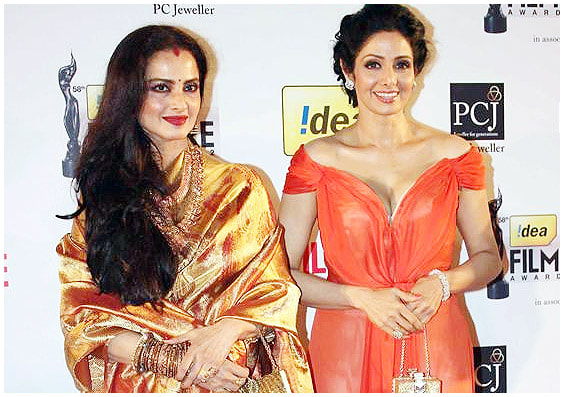 With Rekha at Filmfare Awards 2013
What is your opinion of the new actresses?
I have not seen everyone's work and quite seriously, I am not sure if I will be able to recognize all of them too.

How is she as an actress?
Very good.

How would you compare Madhuri with you as an actress?
Compare? Why? I don't understand the relevance of this question. I can speak about myself. I cannot speak for somebody else.

Insiders say Madhuri Dixit has taken over from you.
No comment.

What kind of a man do you expect your husband to be?
Somebody who is kind, thoughtful and somebody taller than me. ​