How to be a Sridevi fan!

When English Vinglish (2012) was about to be released our friend Rajan Naidu went on to celebrate the occasion in his own way. He booked the whole Maxus theatre for the 7.30 pm which has a seating capacity of 290 seats! He paid Rs 5000 in advance to the theatre. All family and friends were present there to share with Rajan his love. The news got spread and reached news agencies which posted about it be it Times of India, Bharat Student etc.. It was all over the place and we were very proud of Rajan for showing this beautiful gesture for Sri's comeback film.

Times of India said "There have been tales of fans standing in long queues for hours at a stretch to get tickets for films featuring their favourite stars. But booking an entire screen in advance isn't something one has heard in quite a while.". While  Daily Bolly said "It’s genuine to say that once a time the actress was dominating the whole Bollywood platform as the numero-uno starlet and hardly had there any comparison of other B-town actresses with her. But we got surprised to see the obsession still exiting among her fans and you will be surprised to know that one of her dead-end fans Rajan Naidu have booked a whole theatre for private screening of her upcoming movie ‘English Vinglish’ even much before the movie movie releases!" 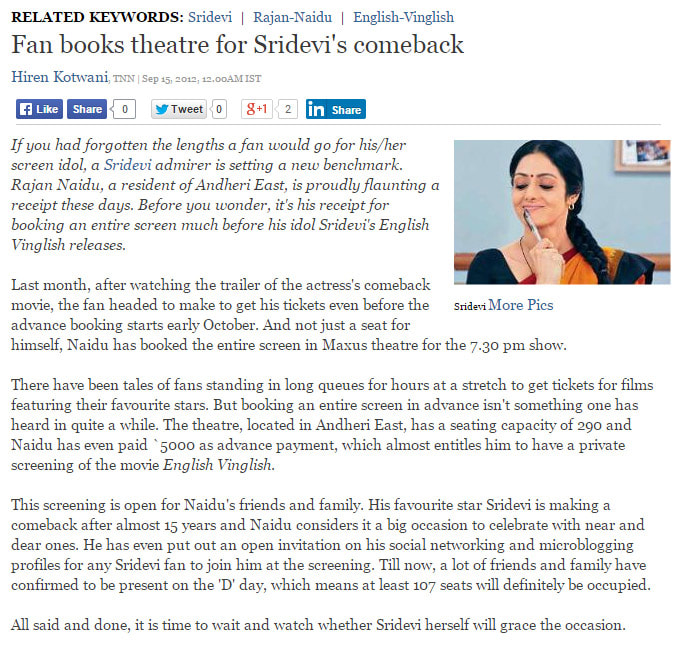 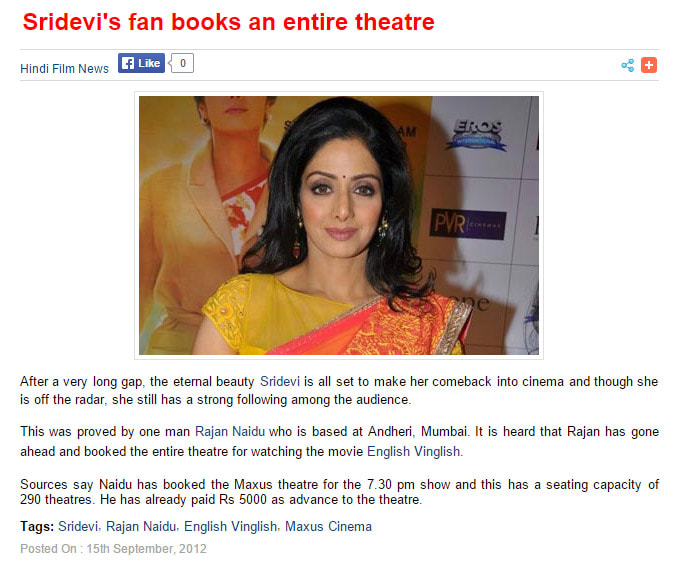 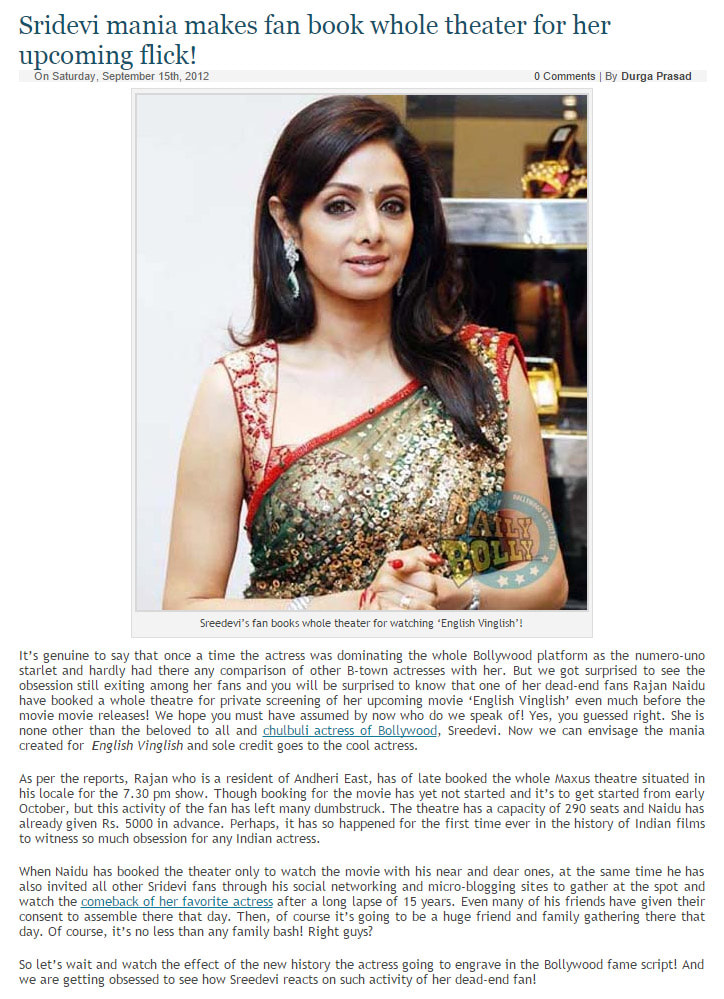 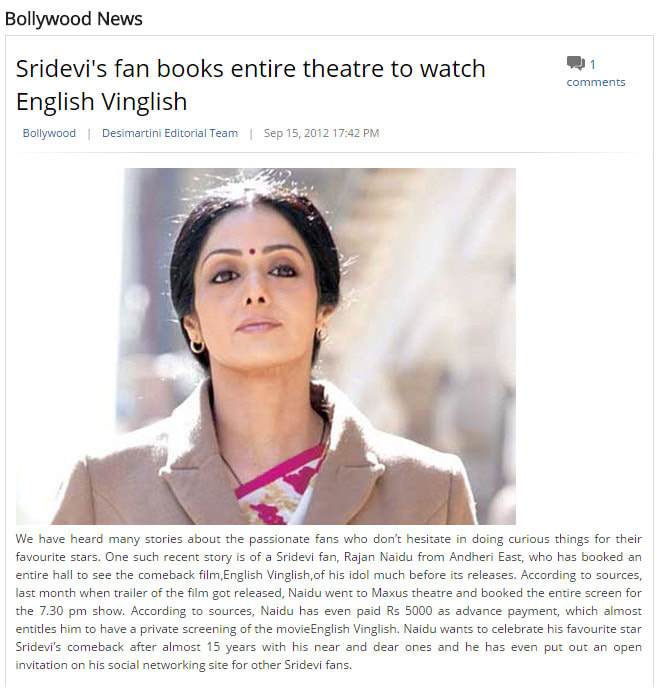 After my recent meet with the Queen of Indian cinema SRIDEVI, I do believe that ‘Yessss! Dreams do come true...’ I had already decided the day me & Naseem planned our baby, that our baby would be christened by none other than the Goddess SRIDEVI... I informed Sridevi Ma’ams Manager about my wish as soon as the Baby was born… I got a call from her office on 20th May that Sri Ma’am was continuously travelling in the month of April and that she just came back... So she has invited me to her home along with my son.. On hearing this I was shocked, thought for a while, is this a dream or its real... for almost an hour i was zapped and couldn’t believe this.. . :)

Was called at Sri Ma’ams home at 3PM on 23rd May.. I reached there sharp at 1455 hrs... her servant made us sit in her living room... I was so tensed, still didn’t believe if it was true... didn’t know how it is going to be... Never ever had heard that a Superstar has invited his/ her fan at home for such purpose... An actress who had done more than 250 films... an actress who has ruled the no.1 position for almost 2 decades in Bollywood... an actress who is called the 1st Female Superstar of Bollywood… an actress who was recently honoured by Padmashri Award.. an actress whom i have been worshipping since I was 4 yrs old.... Cant express in words how nervous i was then... so many thoughts were coming in my mind... :( :)

Was admiring her beautiful abode... which was very tastefully decorated... The entire theme of decoration was Buddha which symbolises peace and serenity... the place was well decorated with some lovely candles.... some scented flowers and family pictures beautifully placed all over the place.. Felt like I am in heaven.... Am sure heaven must not be as beautiful as my Goddess’s abode :) :)

Within 10 mins i heard the noise of someone walking down the stairs and my heartbeat was pumping at its peak... wowwwwww here comes my goddess dressed in black & blue, minus any make-up, very simple and looking absolute stunning and gorgeous... truly the ROOP KI RANI.. :)

She made us feel very comfortable by asking us what we want to eat & drink... She also enquired if the air-conditioning is ok in the room for the baby… Swear on my dearest thing, she didn’t had any starry attitude.. She was so warm and loving that I didn’t feel that i was sitting with such a BIG CELEBRITY... She took the baby in her hand and then asked for his ‘Raasi’ (Zodiac ) and then she asked if we have some name suggestions... I mentioned all different names what had been suggested by my family and she made a note of all the names with its meaning... At this moment my son started crying as he was hungry... Sridevi Ma’am directed my wife Naseem to her Guest room to feed the baby... During this break I spoke about my admiration to her and spoke all that came in my mind..... :)

When Naseem came back after feeding my baby, Sridevi Ma’am said ‘I like the name DAIVIK... It is very unique and has a beautiful meaning. Daivik means Divine. I was thrilled and on cloud 9 as this name also has a part of my goddess name.... She asked if this name is OK with us and we said Yes Ma’am whatever you suggest is OK with us... she then took the baby in her arms... and then said “The Baby Name is DAIVIK... Daivik I wish you all the very best.. Make your parents PROUD... All the best, God Bless you” after saying this she gave a very warm smile, which was so pure and divine.... I was so so so happy and almost had tears in my eyes as this was the BESTEST MOMENT of my life.... :)

Then Sridevi Ma’am made us sit and we had a very casual chat about her forthcoming films, about my family, work and all possible stuffs that came in my mind.. Naseem spoke in length about my love towards Sridevi Ma’am to which she laughed out.... Then came her younger daughter Khushi, and Sridevi Ma’am asked her to greet us which she did sweetly.... Sridevi Ma’ams pet dog “Coco” came excitingly on all of us and started scratching my leg.... Khushi then took him away on Sridevi Ma’am’s instructions... :)

After about 90 mins of lovely moments with my goddess came in Boney Sir, who asked Sridevi Ma’a,– “So did you name your fan’s kid ?” and Sridevi Ma’am replied...”Yes, he is named DAIVIK”. Boney sir then placed his hand on Daivik’s head and blessed him. He too was so simple and lovely to talk to.  Didnt felt that I was speaking to such a big producer.  Truly a great human being :)

Sridevi Ma’am happily signed autographs for some of the fellow fans and also agreed for some pictures with us... While clicking pic with my niece Nikita, Sridevi Ma’am said “Do you hav any other options other than watching my films as Rajan watches it every weekend”. And to Pratik she said “So you were the one who slept while watching my film English Vinglish (It was a hilarious incident I told Sridevi Ma’am about Pratik where he felt asleep while watching English Vinglish during a late night show).

While leaving Sri Ma’am gave a lovely gift to Daivik... a Silver set of eating bowl, glass and a spoon which is a tradition in South.. babies are usually fed in silver bowl/glass during their 1st feeding of food... While we were leaving, she asked us if we need a vehicle to which I said no Ma’am we have got our car... and then she came upto the door to say Bye.. She was still waiting at the door while we were waiting for the car... This made me feel so awkward that my Goddess is wishing us bye and is waiting at the door to see us off was something unexpected..... :) :) :)

I truly feel that Daivik is very lucky to have got me 2 opportunities of meeting my Diva... 1st in November when he was 3 months inside womb and 1 recently when he completed 50 days of his birth... J

My admiration and love to Sridevi Ma’am has now increased 1000 fold from what it was and will always be grateful to her for what she did for her fan... Love you Sridevi Ma’am... you are truly the Queen of Indian Cinema with a Golden Heart... :) :) :) :) 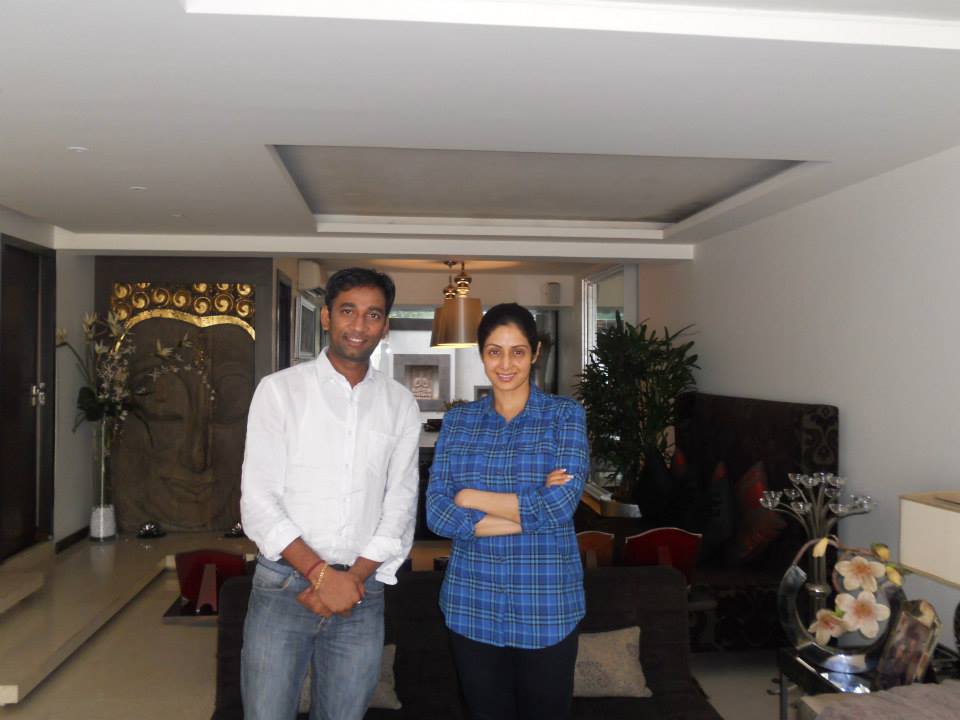 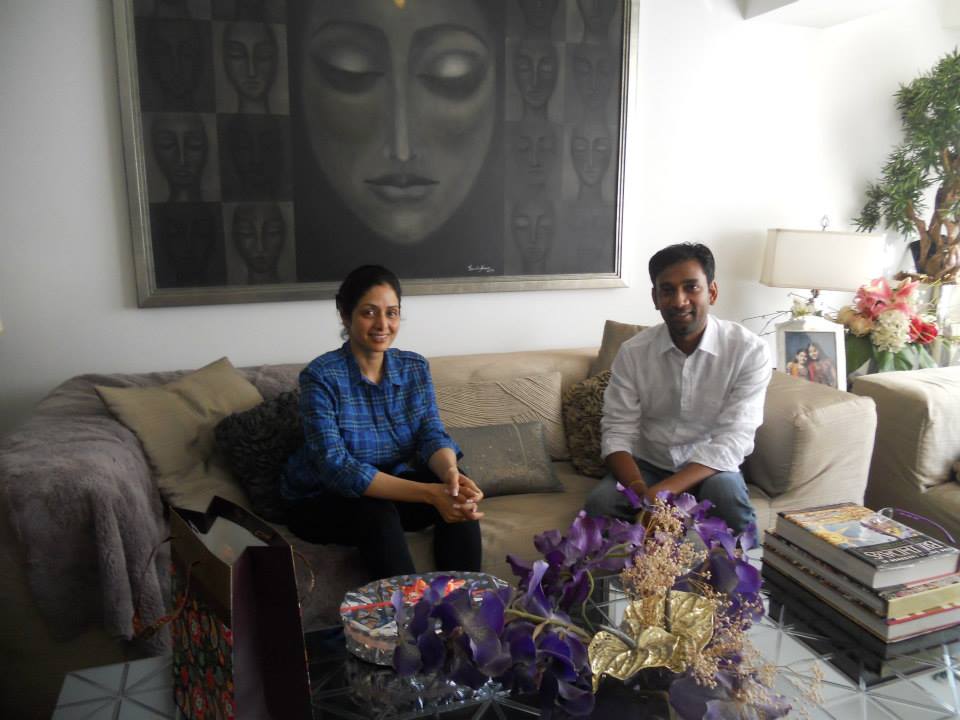 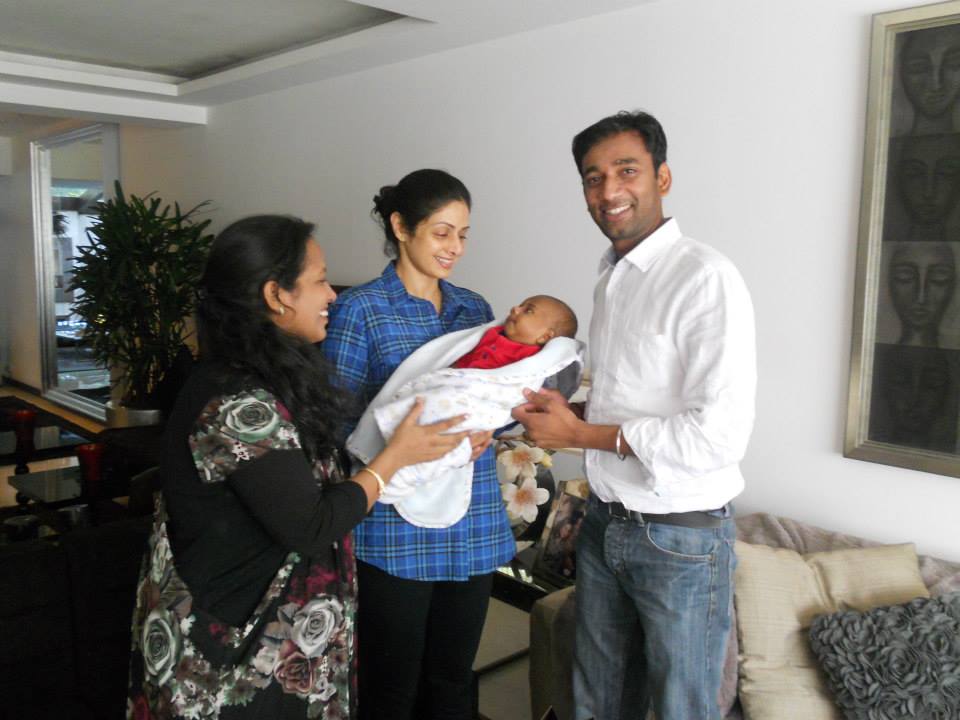 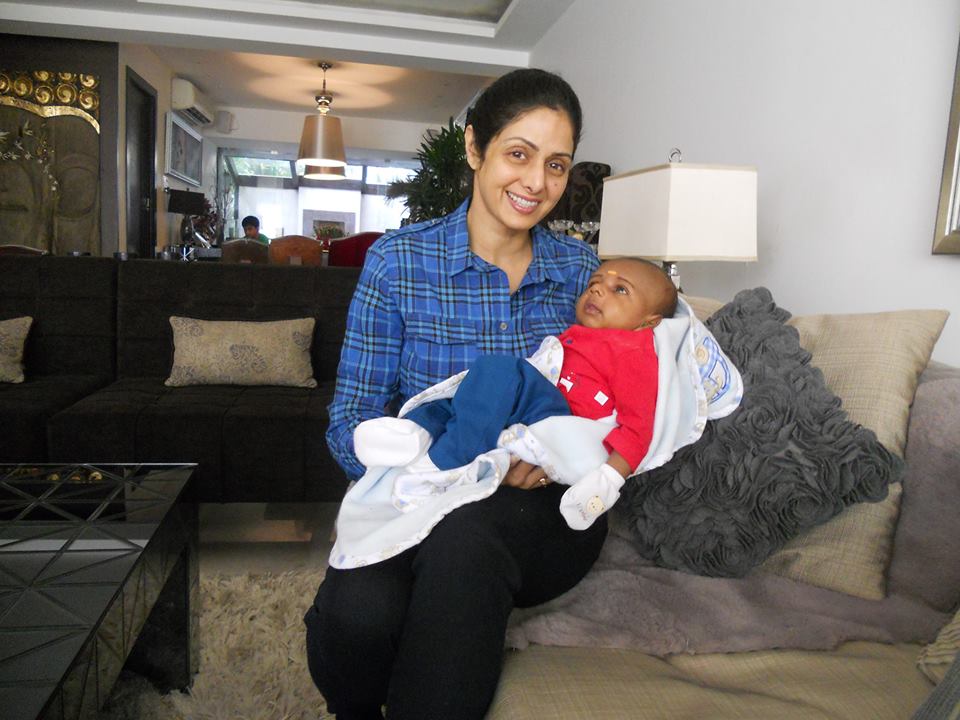 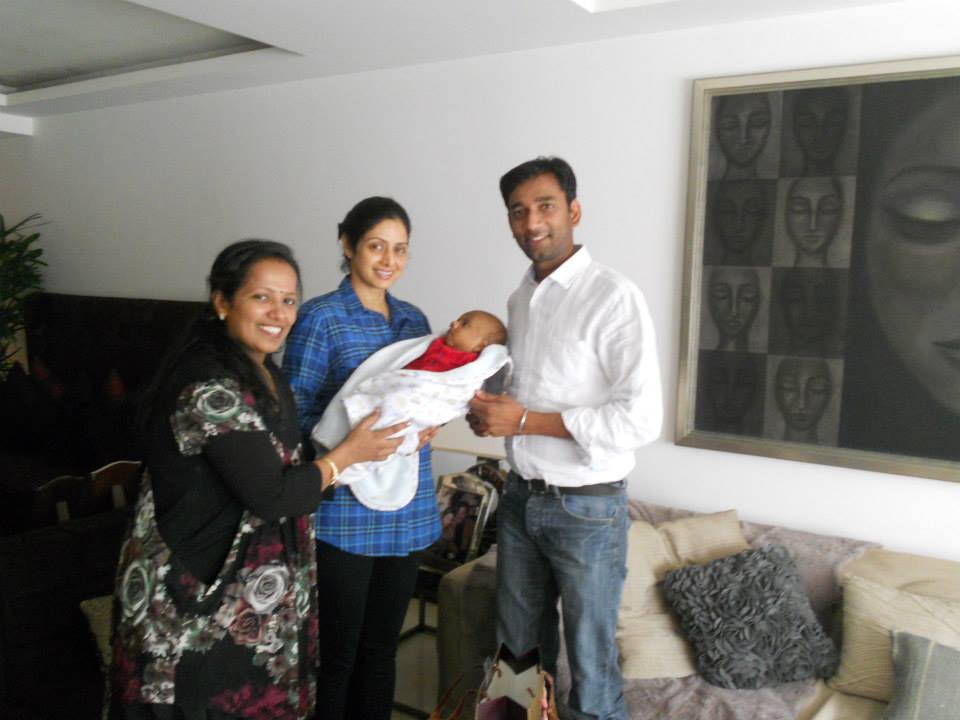